FOR IMMEDIATE RELEASE                                              TSX-V Symbol: BRC
February 25, 2020 ‑ Vancouver, British Columbia.  Blackrock Gold Corp. (the “Company”) announces a Lease Option to Purchase the historic West End and Tonopah Extension properties through a 4 year purchase option from Ely Gold Royalties Inc. (TSX-V: ELY, OTCQB: ELYGF), (“Ely Gold”) for payments totalling US$3 million.  The transaction consolidates these properties into the Tonopah West Project. These properties are a significant landholding within the historic Tonopah silver district located in the Walker Lane trend of western Nevada.
Known as the Queen of the Silver Camps, the Tonopah District produced over 174 million ounces of silver and 1.8 million ounces of gold from approximately 7.5 million tonnes of high‑grade silver-gold epithermal quartz veins1.  The main hosts of gold and silver are volcanic rock of the Mizpah andesite and the West End Rhyolite.  These host lithologies are present on the Tonopah West Project. Mineralization hosted on adjacent or nearby properties is not necessarily indicative of mineralization hosted on the Tonopah West Project.The Tonopah West Project consists of 98 patented and 17 unpatented lode mining claims covering mineral rights on approximately 4.5 square kilometres (1,100 acres).  The project consolidates the historic West End, Victor, 76, Extension and portion of the McNamara mining company holdings under single ownership and provides the opportunity for modern exploration on the western portion of this historic and storied district.  Ely Gold’s wholly-owned subsidiary, Nevada Select Royalty, controls 23 patented and 17 unpatented lode mining claims.  As part of the Agreement, Nevada Select Royalty will complete the purchase of Cliff ZZ LLC’s 75 patented claims which will then be included in the transaction.

Andrew Pollard, the Company’s CEO, stated, “Upon closing of this transaction, Blackrock will have consolidated for the first time in decades a leading land package in what is one of the most significant silver-gold districts in North America. Blackrock now holds the keys to the largest package of claims that make up the famed Tonopah silver district since Howard Hughes held them in the late 1960’s. These claims contributed to the historic production that made Tonopah the second largest silver district in Nevada, behind only the Comstock Lode, and provides Blackrock with multiple compelling drill-ready targets to explore.”

“With the addition of the consolidated Tonopah West package to our Silver Cloud project, Blackrock will have strategic interests in two prolific low-sulphidation epithermal districts in Nevada” Mr. Pollard continued.  “This brownfield addition to our portfolio represents low-hanging exploration fruit, while our greenfield Silver Cloud project provides investors with a compelling blue-sky opportunity. With a presence on both the Walker Lane and the Northern Nevada Rift, these two strategic projects provide Blackrock with a significant position on two prolific gold and silver belts in Nevada.”

Based on the existing underground mine geology reports, historic assay data and production records, the Company is targeting four areas with the potential ranging from 2.5 million to 6 million tonnes with an average grade ranging from 13 to 21 g/t gold and gold equivalent. The potential quantities and grades of the target zones set out below are conceptual in nature, there has been insufficient exploration to define a mineral resource and it is uncertain whether further exploration will result in the targets being delineated as mineral resources. The target zones are as follows: 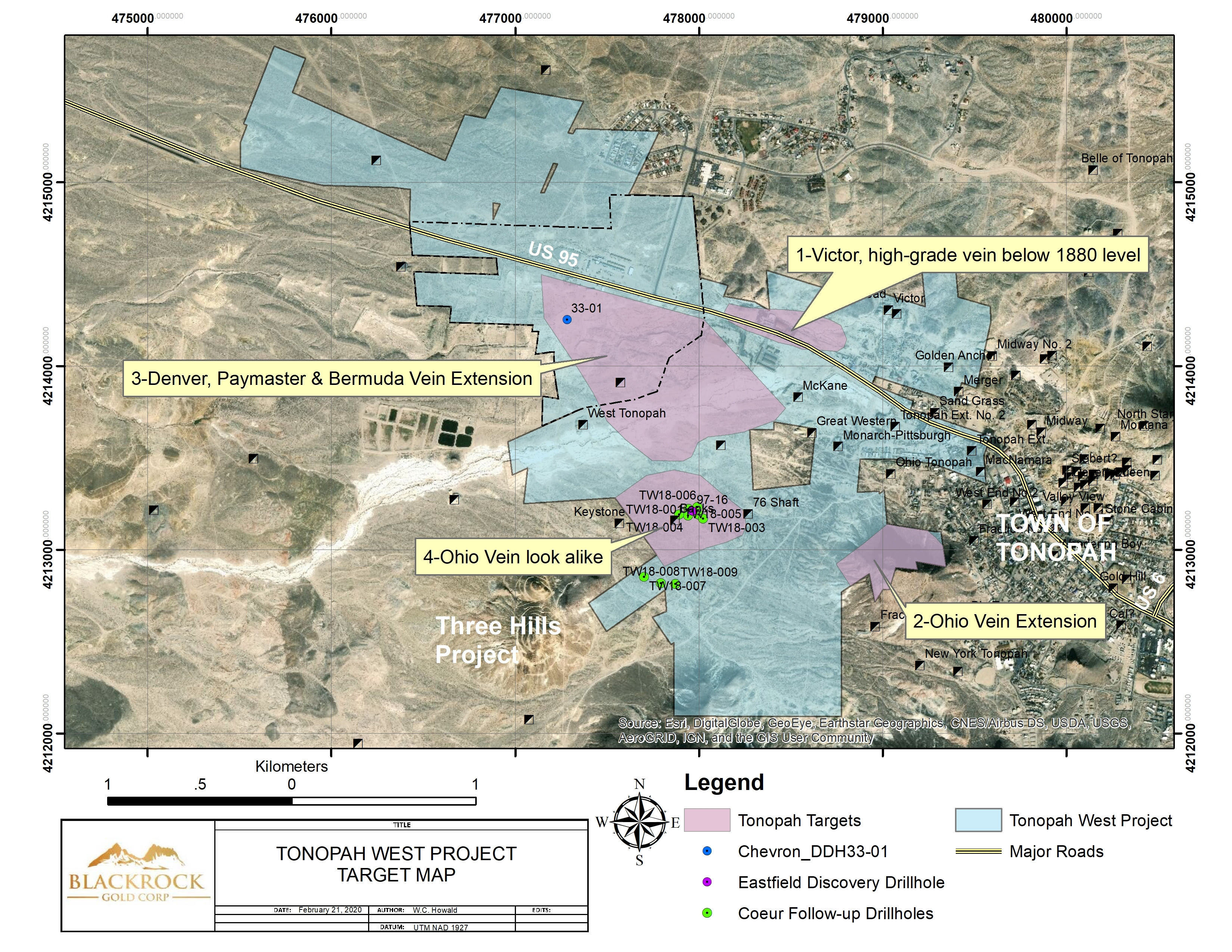 The Transaction
Through Ely Gold’s wholly-owned subsidiary, Nevada Select Royalty,  Blackrock Gold Corp’s wholly-owned US subsidiary is acquiring the Tonopah West Project under an option to purchase.  The 4 year option has payments as follows:

There is no work commitment. Upon option exercise, Nevada Select Royalty will retain a three percent (3%) net smelter returns royalty in respect of all mineral production from the Tonopah West Project.

Nevada Select Trust must complete the acquisition of the Cliff ZZ land package consisting of 75 patented lode mining claims on or before March 28th before any funds change hands.  The Transaction is expected to close on or before April 1, 2020, and is subject to customary closing documents and approvals including TSX-V approval.

Blackrock’s exploration activities at the Tonopah West Project are being conducted and supervised by Mr. William Howald, Executive Chairman of Blackrock Gold Corp. Mr. William Howald, AIPG Certified Professional Geologist #11041, is a Qualified Person as defined under National Instrument 43-101. He has reviewed and approved the contents of this news release.

About Blackrock Gold Corp.
Blackrock is a junior gold-focused exploration company that is on a quest to make an economic discovery. Anchored by a seasoned Board, the Company is focused on its Nevada portfolio consisting of low-sulphidation epithermal gold & silver projects located along on the established Northern Nevada Rift in north-central Nevada, and the Walker Lane trend in western Nevada.
For further information, please contact:

Forward Looking Statements
This news release contains “forward-looking statements” within the meaning of Canadian securities legislation. Such forward‑looking statements concern the Company’s strategic plans, exercise of the Tonopah West option, timing and expectations for the Company’s exploration and drilling programs, estimates of mineralization from drilling, geological information projected from sampling results and the potential quantities and grades of the target zones. Such forward‑looking statements or information are based on a number of assumptions, which may prove to be incorrect. Assumptions have been made regarding, among other things: the ability of the Company to exercise the Tonopah West option; conditions in general economic and financial markets; accuracy of assay results; geological interpretations from drilling results, timing and amount of capital expenditures; performance of available laboratory and other related services; future operating costs; and the historical basis for current estimates of potential quantities and grades of target zones. The actual results could differ materially from those anticipated in these forward‑looking statements as a result of the risk factors including: the ability of the Company to exercise the Tonopah West Option; the timing and content of work programs; results of exploration activities and development of mineral properties; the interpretation and undertainties of drilling results and other geological data; receipt, maintenance and security of permits and mineral property titles; environmental and other regulatory risks; project costs overruns or unanticipated costs and expenses; availability of funds; failure to delineate potential quantities and grades of the target zones based on historical data, and general market and industry conditions. Forward-looking statements are based on the expectations and opinions of the Company’s management on the date the statements are made. The assumptions used in the preparation of such statements, although considered reasonable at the time of preparation, may prove to be imprecise and, as such, readers are cautioned not to place undue reliance on these forward-looking statements, which speak only as of the date the statements were made. The Company undertakes no obligation to update or revise any forward-looking statements included in this news release if these beliefs, estimates and opinions or other circumstances should change, except as otherwise required by applicable law.